Let’s talk about Insecure. I avoided doing a write up about the finale mainly because I’m sick of talking about it, and I don’t have time for the #teamlawrence #teamissa debates. I actually wanna focus on their relationship before she cheated.

First mistake that people make when discussing long term relationships is equating long term with healthy. They are not synonymous. I don’t care if you’ve been together two years or ten years. If your relationship ain’t shit, it ain’t shit. Period. Let’s stop acting like Issa and Lawrence had a bomb relationship. It was bullshit for a long time. Somewhere between year two and year five, they forgot why they got together in the first place. They took each other for granted, blamed each other for things going wrong on their lives, and forgot to appreciate each other.

Some would argue that Issa needed to hold Lawrence down, to stop complaining, because he’s a good man. But both Issa and Lawrence were contributors to the downfall of their relationship. Both were horrible communicators. At no time did Issa articulate what the real issues were. She complained a lot, and allowed herself to get swept up in temporary attention from a full time fuckboy. In reality, girls do that when they aren’t getting what they need at home. They start settling for that 20% instead of fixing their 80% at home. (See the romantic comedy ‘Hitch’ for the 80/20 reference). Issa got tired of holding Lawrence up when he was down and out, and she didn’t consider it was probably hard for him to be in a vulnerable state, jobless and whatnot. Being in your twenties is nothing but endless uncertainty and a perpetual state of melancholy. It’s hard enough trying to figure out your shit, without having to help somebody get their shit together. I can empathize with Issa’s frustrations on supporting Lawrence during this time. 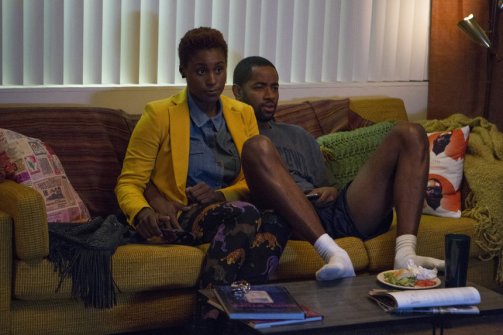 HOWEVER, in reality, most of us do not yet understand what it really means to be there for our partner. I’ll use my parents for an example. My parents have been married 30 years to date. My mother has held my Pops down in more ways than one. She convinced him to go to grad school, even went so far as to fill out the application for him. When he got laid off for six months, she held the family down financially, and made sure my sister’s school tuition was paid, the mortgage was taken care of, and even helped get my sister her first car during that time. She has supported him through all types of setbacks, job transitions, hell, they moved together from Nigeria, with nothing but $1000. THAT’s how you support your man. How many of us really know what any of that is like in our 20s? We so worried about getting married at whatever age, going on $200 dates, baecations, blah blah, we don’t know how much WORK it takes to be committed. I mean, really committed. Ya’ll so quick to criticize Issa when ya’ll don’t put that much effort in your ACTUAL romantic relationships in real life. Stoppit.

Let’s talk about Lawrence. Lawrence is good on paper. Degree, no kids, good looking, loyal, etc. This is what qualifies Lawrence as a ‘good’ man. I’m gonna stop you all right there. Being good on paper does not equate to being saint/good man. Sorry. First of all, ya’ll insist that us, as women hold ya’ll down regardless of what shit goes left. How long was Issa supposed to ‘hold Lawrence down?’ They aren’t married. Real talk, the moment the relationship started to go downhill, is when they should have separated. There is no reason why it should have gotten to the point where Issa cheated, and now shit is over. Lawrence should have been strong enough and less prideful, to get 2-3 jobs to support HIMSELF, let alone Issa. It’s not about him taking care of her, it’s about him taking care of himself first. He allowed himself to get so despondent at being unemployed, he let himself become stagnant. Stagnant professionally, stagnant personally, stagnant romantically. You do what you have to do to survive and get on your feet. Lawrence didn’t need to get a job to please Issa, to get her to stop complaining, to make her happy. Lawrence needed to get a job to rebuild his own life, to make HIM happy, to create stability for HIM. Only when you can take care of yourself, can you take care of somebody else. That was Lawrence’s failure in this relationship. Ya’ll gotta adjust your expectations. IF you aren’t committed to yourself, your growth, your wellness, how the hell are you gonna take care of your partner? It won’t work. I can say that because I’ve experienced it myself, I’ve observed it in relationships around me. People stay in long term relationships sometimes because it’s comfortable, it’s safe, it’s familiar. That is unhealthy, if the relationship is no longer growing in a positive, healthy manner. So, if you ask me, they both failed. They did what they didn’t want to do: hurt each other, LONG before Issa cheated.