Sometimes you only have one shot, just ONE, to fix something that is on the verge of being broken forever. Putting yourself in the most vulnerable position imaginable in order to experience one of two things. Indescribable love or gut wrenching heartache. Few are brave enough to risk it, and only the emotionally resilient can withstand the outcome, be it positive or negative.

We’re here to talk about grand gestures. For those of you who don’t get what I mean, I have plenty of examples from some of my favorite movies:

The ending scene, where Harry crashes the NYE Sally is attending and professes that he’s loved her for years.

In ‘That Awkward Moment’, when Jason shows up at the reading, and re-enacts the story of when he first met Ellie.

‘Sex and the City’

In ‘Sex and the City’, the millions of emails Mr. Big sends to Carrie after standing her up at the alter. 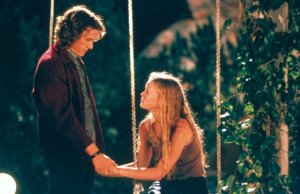 In ’10 Things I Hate About You,’ when Kat reads her poem in English class, professing her love to Patrick. You know you teared up, don’t lie!

Now, granted, these are all fairly over the top, dramatic, and in some cases, unrealistic. But I want you guys to hear me out. The ‘Grand Romantic Gesture’ does not have to be something crazy. It fits whatever the circumstances call for. This could be a drunken text stating ‘ I still love you,’ this could be showing up at your beloved’s house unannounced, this could be sending a gift, it could be whatever in order to get the job done.

After watching a million romantic comedies, I can’t help but wonder if our generation is capable of being that open, that vulnerable. I’m not talking about getting married, or having kids. We’ll get to that. I’m talking about when you’re still in the dating phase, and maybe you’ve hit an impasse. A breakup could potentially be on the horizon, and now it’s time that either party make a move. How bad do you want this relationship to work? How much do you wanna fight for it? Are you willing to go battle, lay everything out on the line, put yourself out there, and risk the chance that it could all be over?

I definitely have friends that have done ‘The Grand Romantic Gesture’ and the outcomes have varied. This is a food for thought post. Part of allowing yourself to cultivate a romantic relationship is also a willingness to be that vulnerable when it calls for it.  All of you who say you’re ready, won’t even text him first. You won’t tell her that you are really feeling her. Everyone is too busy following some imaginary rulebook on how to have a ‘happy ending.‘ Assuming that getting there isn’t work in itself.  It’s much easier to serial date, then to break pattern, and  have a conversation about where you are at and what you really want.

I challenge you. I challenge you to really think about the idea of vulnerability, and how vulnerable you allow yourself to be when traveling on this love journey. Maybe watch a romantic comedy or two, there’s always just a smidge of truth if you read between the lines.;)