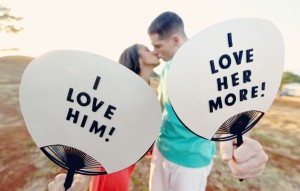 Oh ya’ll though it was over?? Absolutely not! It’s the first day of fall, and I thought it was the perfect time to start the new season with our soon to be newly weds, Tasha and Brian. There’s nothing like a fall wedding to start off the season right, and I couldn’t be more excited for the twosome.

Reasons why I like this couple and you should too:

1. Tasha is hilarious, driven, and happens to be my best friend’s sister. Automatically making her dope.

3. They are both in the military, and are both in careers that involve helping their fellow man/woman. Who doesn’t love that?!

They are getting hitched this Saturday! Read their awesome interview and join me in congratulating the happy couple! Mazel Tov!

When did you first meet?

We first met in 2010 in San Antonio Texas. We were introduced through a mutual friend. Our friend was attending the same military course as me, and he played football with Brian when they were undergrads at MIZZOU.

There was a group of us who went out to a dancehall called “Cowboys” and he was definitely ‘dressed for the part.’ I thought he was an All- American Cowboy who was polite, well-mannered, easy on the eyes, but “not my type.” Getting to know him was very easy that night, because I did not have any expectations, it wasn’t a date (we just happened to know the same person) we were out with a group of friends. He opened doors, made me laugh (A lot), and he wouldn’t let me pay for anything. I had to beg him to let me “get the next round’. Again, this wasn’t even a date! He was a gentleman.

How long did you date?

We dated off and on at first. Once I left Texas I returned to Virginia. It was long distance, so we never fully committed ourselves to each other, and we started to drift apart. I was dating other people and so was he, but we still found time to see each other. I flew out there more often than I’d like to admit. A little over 2 years ago I went back to Texas for another Army Nursing course and we reconnected. Sadly, I was only there for 4 short months and had to move to Hawaii, but this time was different. We agreed to be exclusive. After all that time it took a huge body of water and 4,000 miles to “bring us together”.

How long have you been engaged?

We were engaged for only 2 months before we got married.

Most important thing you have learned thus far in your relationship?

Patience, and learning how to Listen, not just to hear one another, but truly Listen to one another. (still working on this one, always room to improve)

I’m no love Dr., but I will honestly say that what made “us” work so well, despite the distance, was the fact that we were working on “forever” and not just for the lust of the moment. We started the conversation of “marriage” before we were even engaged. This may sound cheesy, but we had our own little “book club” where we would read relationship books by Gary Chapman, “The five languages of Love” “the five languages of Apology” and “Things I Wish I’d Known Before We Got Married”. We would then discuss them, gaining insight on each other’s wishes, wants, desires, and needs. Maybe it’s the military in us, or the fact that we want to be sure of our compatibility outside the bedroom, but we want to be prepared and aware of issues that may arise in the future. Let’s be honest, although, love and passionate sex are a must, a relationship needs a lot more to be able to build and grow.

Laugh a lot and never stop having fun with each other.

What makes you feel that you are ready for marriage?

I couldn’t imagine spending my life with anyone else. [!] 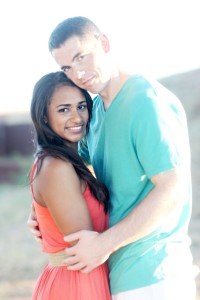